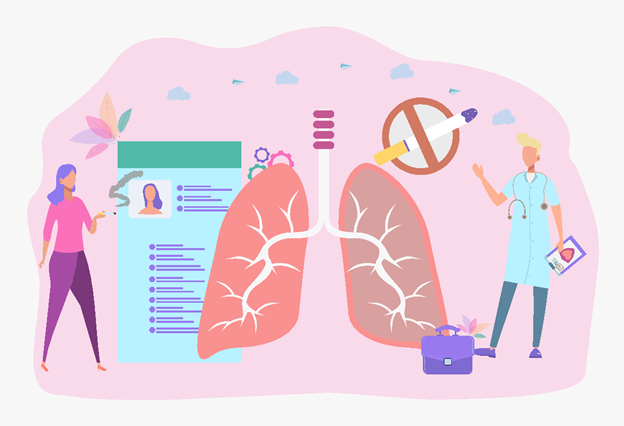 A Bioanalytical Method for the Analysis of Nicotine in Human Plasma

As part of the study, Dr. Hughes and her team developed a bioanalytical method for the analysis of Nicotine and its metabolite Cotinine in human plasma. The method described herein has been successfully applied in the pharmacokinetics assessment of therapeutic doses of Nicotine in human clinical trials.

Nicotine As ETS and As Replacement Therapy

Cigarette smoking is the most common form of tobacco use worldwide, with more than 6 trillion cigarettes smoked annually. Environmental tobacco smoke (ETS) refers to being exposed to someone else’s smoke, and it is estimated that from ETS alone, there is 22 million kg of Nicotine released into the atmosphere each year. Nicotine is present in the air, on surfaces and in dust and is a ubiquitous environmental contaminant.

In addition to being present in tobacco smoke, Nicotine is also indicated for smoking cessation to relieve withdrawal symptoms. Nicotine replacement therapy provides Nicotine in the form of gum, patches, sprays, and inhalers without the other harmful chemicals present in tobacco.

In humans, more than 70% of Nicotine is metabolized into Cotinine. While Cotinine itself is not an environmental contaminant, it is a marker of exposure to ETS (e.g., it will be present in the plasma of non-smokers exposed to significant levels of Nicotine). 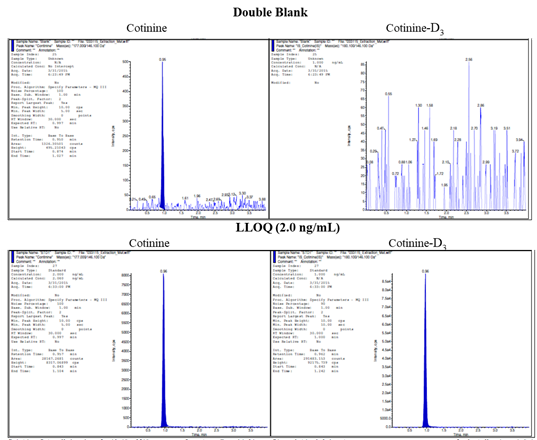 As stated in the introduction, BioPharma’s Bioanalytical Laboratory successfully developed a bioanalytical method for the analysis of Nicotine and its metabolite Cotinine in human plasma.

Briefly, the linear dynamic range of the method is from 0.20 ng/mL to 15.00 ng/mL for Nicotine and 2.00 ng/mL to 150.00 ng/mL for Cotinine. The assay utilizes a solid-phase extraction requiring 200 µL of human plasma with stable label internal standards (Nicotine-D4 and Cotinine-D3).  Samples are chromatographically separated using a HILIC analytical column and a gradient mobile phase containing acetonitrile and methanol in ammonium acetate. The AB Sciex API 4000 mass spectrometric instrument is operated in positive ion mode using a Turbo IonSpray source and MRM detection. The total run time for a 10 µL injection is 4.0 minutes per sample.

Under the optimized extraction, chromatographic and detection conditions, a selective, sensitive, accurate and precise method was validated with no significant impact from contamination from ETS.

The method has been successfully applied in the pharmacokinetics assessment of therapeutic doses of Nicotine in human clinical trials.

Dr. Nicola Hughes joined the BioPharma Services team in 2016, bringing with her more than 20 years of research experience and proven leadership skills. As vice president of Bioanalytical Laboratory Operations, her mandate starts with R&D, to develop robust and reliable methods to drive efficiency, expedite analysis and deliver accurate and time-critical results. Under her leadership, BioPharma delivers best-in-class bioanalytical services, making it a global leader in clinical research.  In addition to being an accomplished leader and scientist, Dr. Hughes is a businesswoman and vineyard co-founder. Learn more about her unique journey here.

BioPharma Services, Inc., a Think Research Corporation company, is a full-service Contract Research Organization (CRO) based in Toronto, Canada, specializing in Phase I/IIa and Bioequivalence clinical trials for international pharmaceutical companies worldwide. BioPharma has clinical facilities both in the USA and Canada with access to healthy volunteers and special populations.