In making inferences about a population, parametric or nonparametric methods are used;

When to use nonparametric tests?

Advantages and Disadvantages of Nonparametric tests

We can simulate a random sample of size 1000 from an exponential distribution with lambda (rate)= 0.2. 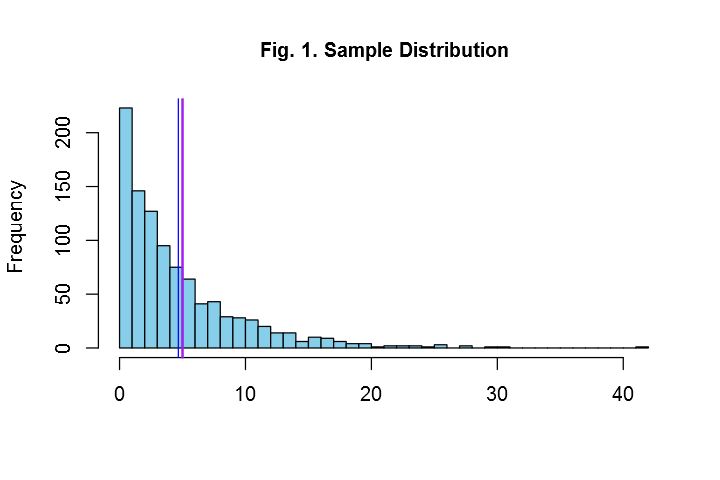 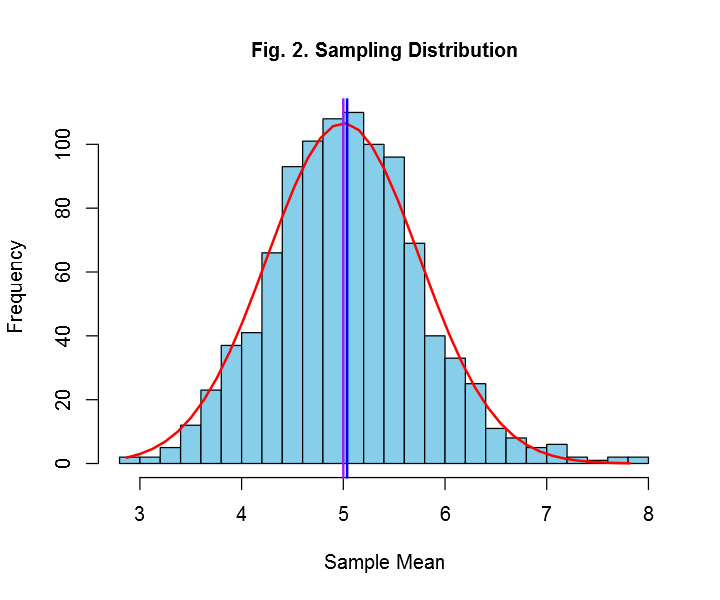 The CLT theorem states that the sampling mean is approximately normally distributed with the mean of the population mean (5 in this case, because mean =1/lambda=1/0.2=5) and variance of the population variance divided by the sample size (40 in our case). In short, the sampling distribution is N(μ,σ2/n). Fig 2 clearly demonstrates the CLT theorem because it is bell-shaped, and it is approximately centered at 5.

Due to the amazing CLT, we can conduct parametric tests in sample data that does not come from a population that follows normal distribution as the sample size increases! A very powerful theorem, indeed!

Let us consider we have a sample of 10 individuals.

For the parametric test, we will test if the population mean differs from 25.

To test the hypothesis, we will use the information of the sample mean= 19.25, sample standard deviation=2.0, and sample size=10.

For the nonparametric test, we will test if the population median differs from 25.

Below are some of the commonly used nonparametric tests that can be used in different clinical trial designs.

The Hodges-Lehmann estimator (HL estimator) was originally developed as a non-parametric estimator of a shift parameter. As it is widely used in statistical applications, the question is investigated what it is estimating if the shift model does not hold. It is shown that for data whose distributions are symmetric about their median, the Hodges-Lehmann estimator based on the Wilcoxon Rank Sum test estimates the difference between the medians of the distributions. This result does generally not hold if the symmetry assumption is violated.

Consider the below example, where we have two groups of people with some sort of measurements to calculate the HL-estimator.

To calculate the Hodges-Lehmann estimator, we conduct the following steps:

Does the Nonparametric methods test for the median difference?

Yes! If the assumption about the shape of the distribution is met.

In the example below, the median in both data is 0. One would assume that the Kruskal-Wallis test would be insignificant. However, K-W test is significant! This is because K-W test is testing if the shape of the distributions are different and indeed, they are. If the shape of the distributions were the same for both data, then we could stretch the K-W test to test the difference in the median for these populations.

As an example of a parametric model, let us look at a multiple linear regression model.

Where Y is the dependent variable and Y1,..,X4 are the independent variables. In the parametric approach, the model is fully described by a finite set of parameters (in this example, ß1,…,ß4) that has an easy interpretation.

In the nonparametric statistcs approach, a model can be described as:

In this blog, we summarized nonparametric statistics and their use in clinical trials. They are growing in popularity as sponsors and agencies are more and more interested in the pharmacokinetics profile of specific PK parameters that can not necessarily be analyzed with the parametric methods. Some takeaway messages from this post could be: