Research Roundtable for Epilepsy: A Reflection by Dr. John Oldenhof 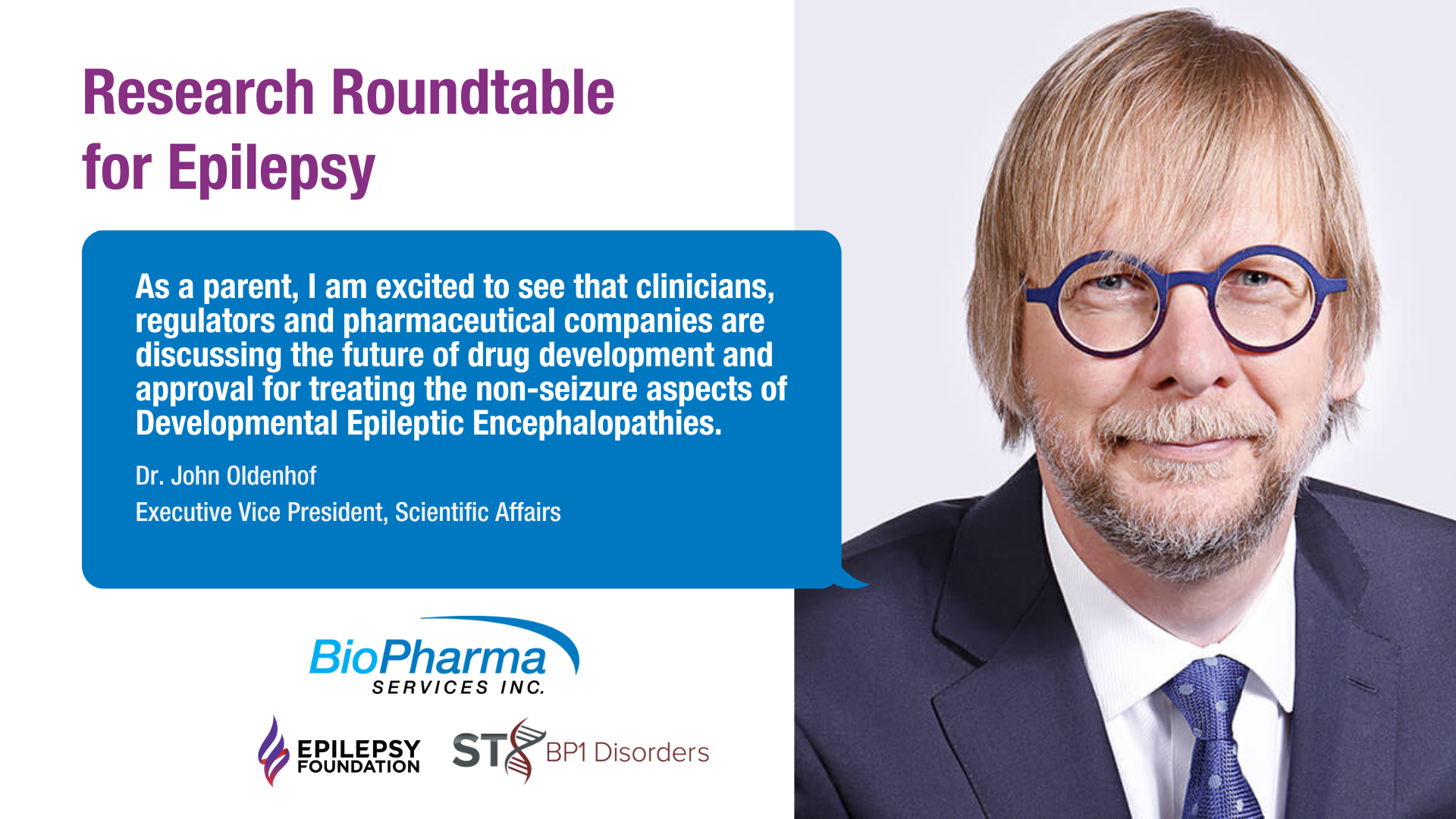 At the end of May, I had the pleasure of being invited to present at the Research Roundtable for Epilepsy (RRE) and discuss my experience as a parent with a child with a Developmental Epileptic Encephalopathy (DEE) from the perspective of a clinical research scientist.

This meeting is organized by the Epilepsy Foundation. This meeting, now in its seventh year, brings together regulators (FDA, EMA, Health Canada), clinicians, academic researchers, epilepsy advocacy groups and pharmaceutical companies. This meeting has been very effective in discussing current relevant issues in epilepsy and gaining a consensus across the various organizations. This year there was a focus on DEEs.

At the meeting I spoke about my son Lukas who is 12 and has been diagnosed with the STXBP1 disorder (stxbp1disorders.org), a condition that results in the impaired merging of synaptic vesicles with the plasma membrane and consequent reduction in neurotransmitter release. It was an honor to be there as a parent representing the STXBP1 community and Developmental Epileptic Encephalopathies (DDE) in general.

In many cases, but not all, DEEs are characterized by severe epilepsy, but are also accompanied by profound impacts on cognition, communication, gross and fine motor skills. Many children are non-verbal, may be diagnosed with autism, and are unable to take care of themselves. The quality of life for the children and their parents are profoundly impacted for the duration of their lives.

The last decade has seen major strides in understanding the genetic and mechanistic causes of pediatric epilepsies and developing potential novel therapies. With the identification of many (over 100) single genes and the proteins they encode and mechanisms they affect, we are at the threshold of many new treatments. Strides in drug screening and gene therapy approaches now allow multiple ways to target the identified deficiencies.

Up till now, neurologists and epileptologists were only able to treat DEEs through traditional antiepileptic medications that focused primarily on the seizure aspects of these disorders. There are about 30 approved epilepsy medications in the United States, and many of them exert their effect through inhibitory GABA receptor activation. These medications tend to reduce the excitability of the brain and increase the seizure threshold.

The current medications have minimal impact on the developmental aspects of DEEs. In fact, the drugs themselves may contribute to cognitive issues. Avoiding seizures and/or controlling seizures may limit the impact of the seizures themselves on cognition, but they tend not to address the underlying neurological deficits that lead to the cognitive deficits.

When my child was 3 years old, and just diagnosed with his DEE, I was disheartened at the limited “tools” available to the neurologist to treat the epilepsy and how there were no medications that would address his cognitive deficits. When his seizures were somewhat controlled by the neurologist, it felt like, “that’s it, that’s all we can do, our job is done”. Meanwhile, I was left with a child who to this day cannot communicate his needs or feelings.

One message I had at the RRE meeting was that I felt like I was at the wrong scientific meeting. It felt like I was presenting at the meeting on coughing, while I wanted to be at the meeting talking about how to cure the cold. All the parents noted that we need to go beyond the control of seizures and address the cognitive and communication deficits.

Although we prepared our talks independently, our messaging was incredibly complementary. My message was twofold.

The FDA is working hard to allow new therapies for DEEs to be developed and approved. The FDA is making a large effort to listen and understand the needs of children with DEEs and the things that are important to parents. They understand that we need to move beyond seizure control. This includes outcomes that are felt to be meaningful to caretakers and the safety profile that is felt to be acceptable. The FDA has been working on a 4 part guidance – Patient Focused Drug Development Guidance (CDER Patient-Focused Drug Development | FDA). The FDA emphasized that companies should come early to discuss clinical development plans and what outcome measures may be acceptable.

Pharma companies are working on various strategies to target these DEEs including repurposed drugs, new chemical entities and genetic therapy approaches that directly target the genetic protein impairment. Natural history studies and disease models are being used to understand the progression of the disease and what deficits are of concern to parents. They are working with existing clinical instruments, but also developing new instruments that work for the kind of deficits and magnitude of potential improvements that are seen with DEEs and across age groups. They are hoping to work with regulators to develop protocols that allow for realistic clinical studies but also demonstrate safety and efficacy.

Parent foundations are a major driver of drug development for rare diseases. Not only do they push for research, they are part of the research process. They help to identify endpoints that are meaningful, help pharma companies connect with patients and parents, and help to make a rare disease clinical trial ready. Parents can clearly articulate to regulators what is important and meaningful to their children and parents. Although the potential for disease modifying and/or curative therapies are on the horizon, more modest clinical outcomes are acceptable to parents and regulators.

A concern that I have had, and this was apparent during the meeting too, is that these orphan diseases (rare disease get special regulatory designation to encourage drug development for these small populations of patients) are also orphan diseases in the sense that they do not fit with the traditional clinical specialties. Traditionally, DEEs are seen by neurologists and epileptologists, but the specialty has been primarily focusing on seizures outcomes since there were simply no therapies to address the development aspects of these diseases.

Now that we are at the cusp of dealing with the development component, the study design and endpoints are not aligned with the knowledge and expertise of the specialty. Studies will last longer than 4 months, the standard for assessing the efficacy of seizure medications. The outcome cognitive and communication measures are not something the specialty is familiar with. We need to look beyond seizure control and the assessment of these in clinical studies.

This may mean that we need to include developmental pedestrians, psychiatrists, clinical psychologists, and speech therapists to help with the design of the protocols and the conduct of these studies. It may also mean that the role of neurologists needs to evolve so that they are more familiar with diagnosing these DEEs and have experience of treating these diseases with the new medications that are sure to be approved. It is exciting that neurologists and clinicians will soon have more tools in their toolbox to treat DEEs. Furthermore, itIt will be important for everyone to know how to best use them.

I left the meeting very hopeful. The conditions are right for the studies on these new medications, with the promise of addressing more than just the seizures. These developmental issues should not be seen as comorbidities, but as the main concern. Regulators, clinicians and pharmaceutical companies are finding ways to create drugs and assess those drugs. This will not be easy, but the good news is that the rare diseases can work together and advances in drug development strategies and methodologies gained for one disease will benefit the other diseases.