Williams Design and its Applications within Clinical Trials

Repeated measures design has been widely used in the early phase hap study, such as the two-way crossover design for a regular Bioequivalence study. Since the same subjects receive multiple measures, one obvious advantage of the repeated measures design is that fewer subjects are needed to be compared to a parallel design. When there are more than two treatments, there will be different ways to arrange the treatment sequences.

Williams’s design is one of the well-known balanced designs for repeated measures with more than two treatments. There are some similarities between the Williams Design and the Latin Square. Actually, William’s design can be considered as a special case of the Latin square.

In the first section of this blog, we will start from a brief introduction of the Latin Square. And the second section will go through the general rules of preparing Williams design and the corresponding underlying conditions. For the last section, we will shed some light on the application of the Williams design, which is the human abuse potential study.

Section 1: What is Latin Square?

There are few advantages and disadvantages of using Latin square design. The advantages include:

Section 2: What are Williams Designs?

There are general rules of using Latin square to create a Williams design, which are:

The general rules are straightforward and easy to follow. However, there might be some confusions regarding why we need to follow the rules. It is related to the underlying conditions of the Williams design.

There are two conditions for a balanced design:

Basically, the first condition aligns with the definition of the Latin square, so any Latin square would work under this condition. However, the second condition plays an important role in achieving a balanced design.

In the above examples, the Latin square in the left-hand side is from the previous example. In this 4 x 4 Latin square, the pair of treatment AB appears 3 times, which are on the first, the third and the last row.

In the right-hand side example, we have one pair of treatment AB and BA, respectively. Similar for the pairs of treatment BC, CB, AC, CA, etc. The second Latin square would be a good fit for a Williams design. And the Latin square is called an Orthogonal Latin Square. The reason for calling it as orthogonal Latin square is because we have rows that are exactly in opposite sequences. If looking close to the Latin square, we will notice that the first row is in a sequence of ABDC, while the third row is in an opposite sequence of CDBA. It is also the same for the second and the fourth rows.

By which mean, even for the even number of treatments, we could not randomly pick a Latin square for the Williams design but find the appropriate one.

It will raise another question: can we find one appropriate Latin square for the Williams design when there is an odd number of treatments? The answer is no.

There is an example which will be helpful to explain the question. In order to show the example, we need to briefly introduce the Residue Modulo first.

In the Williams’ paper, the residue modulo is used as an example of a Williams Design. Assume each treatment is one of the classes of a complete residual modulo n, the differences between any two adjacent treatments can be calculated, and the values will be range from 1 to n-1.

When the number of treatment n is an even number, we could use the below row as the first row of a Latin square. It covers all treatments from 0 to n-1. The differences between two adjacent treatments are calculated, as highlighted in the following picture. The differences highlighted in blue are 1, 3, 5, 7, 9, etc., we could easily identify that they are all odd numbers, and they are in an increased trend.

The above example shows that using one Latin square for an odd number of treatments will completely ignore one possible type of differences, which will lead to an unbalanced design. To achieve balance, a second Latin square with opposite sequences need to be added. In the below example, the first row from a second Latin square is added.
The differences between two adjacent treatments are calculated and highlighted in red. There are one set of decreased even numbers (6, 4, 2, etc.) and another set of increased even numbers (n-5, n-3, n-1 etc.), which cover all even differences twice.

For an odd number of treatments, by combing two Latin squares, all possible differences are covered, which meet the second condition of the Williams design eventually.

Section 3: Application of the Williams Design in HAP Studies

HAP studies assess the likelihood that a drug with pharmacological activity on the central nervous system produces positive subjective responses that are indicative of abuse potential. HAP studies are normally early phase clinical trials, so the study subjects are not patients but healthy recreational drug users who have experience with the same class of test drug.

There are at least four treatments, which are two doses of one test drug, one positive control and one placebo. The outcomes for HAP studies are mainly subjective abuse-related response, such as drug liking VAS, good effects/bad effects VAS, any effects VAS etc.

The statistical analyses of HAP studies are normally testing the following three hypotheses.

The first hypothesis is testing the sensitivity and integrity of the HAP study, evaluating if the study is sensitive enough to detect a difference between the known positive control (C) and the placebo (P). Similar for the second and the third hypotheses, which are comparing the test drug (T) with the positive control (C), and the test drug (T) with the placebo (P), respectively.

In the hypotheses, the value of 1, 2, 3 vary for the different subjective measures. For example, 1=15 is normally used for the drug liking Emax.

For a regular Williams design, there is no sufficient degrees of freedom to access so many terms as shown in the above full model, so a simplified model can be used. In the simplified model, the period, sequence, treatment, and first-order carryover effect will be included as fixed effects, and subject as a random effect.

The null hypothesis is that there is no first-order carryover effect, while the alternative hypothesis is there is a first-order carryover effect. Since the HAP studies are normally conducted with a relatively small sample size, it is possible to make Type II error, which is failed to reject the null hypothesis when it is not true. To reduce the possibility of making Type II error, a significant level larger than 5% is normally used.

The commonly used significance level is 25%, and there are three scenarios:

Similar to other parametric methods, there are several underlying assumptions for the linear mixed-effects model. If any of the assumptions is violated, other methods need to be used instead. The below picture shows a flowchart about how to proceed with the analyses. 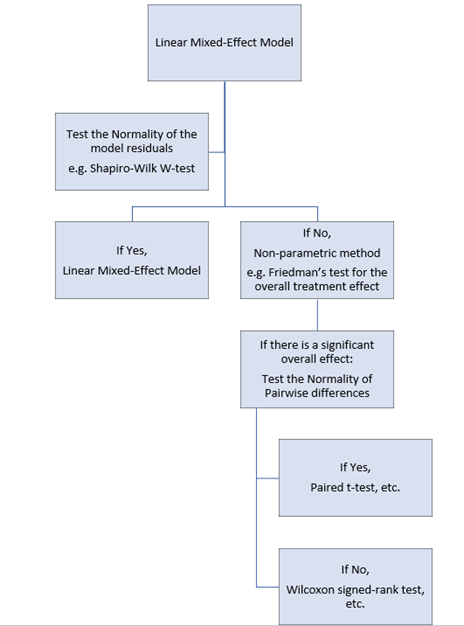